Digitization pioneer, physicist, honorary chairman of the supervisory board of the Mainz-based company GIP AG Gesellschaft für Industriephysik and long-time member of the University of Mainz: Prof. Dr. Peter Beckmann is well-known and respected in the scientific and business world. On Sunday (20.6.) he turns 90 years. 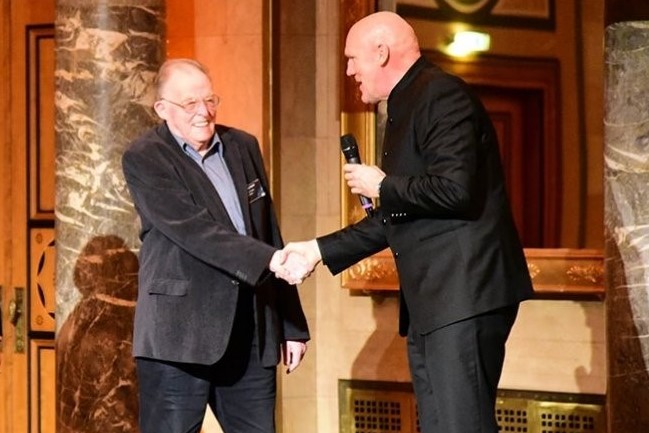 Early on, Peter Beckmann knew he wanted to devote his life to science and deliver groundbreaking insights. Born in Münster, Germany, he earned his doctorate in physics at the age of only 27. He went on to work with top physicists, pioneers of quantum field theory and Nobel laureates. In 1962, his stellar career took off further when he was awarded the honorary title of associate professor, Extraordinarius, for Theoretical Nuclear Physics by the University of Mainz. Only one year later, the University of Mainz handed him the Chair of Theoretical Physics.

Peter Beckmann established himself as a valued and progressive member of the university, serving as dean of his faculty and vice president of the university, among other positions, during his 43-year professorial career in Mainz. In doing so, he represented the University of Mainz both legally and personally and was the contact person for all students in the physics department. As one of the first professors in Germany, he provided his lecture notes online for his students as early as 1996 and has since been considered a pioneer of digitization.

At the age of 63, in 1994, he was awarded the Federal Cross of Merit 1st Class for his commitment to society.

Prof. Beckmann has accompanied GIP since he and the founder of GIP, Dr. Bernd Reifenhäuser, established a joint research cooperation in the field of industrial applications of nonlinear dynamics and analysis in 1992. As part of this cooperation, Prof. Beckmann supervised a number of doctoral dissertations. "One of them is that of Dr. Alexander Ebbes, now the CTO of GIP", Dr. Reifenhäuser recounts. "His doctorate was in many ways groundbreaking for further research and development." Dr. Ebbes' doctorate focused on the application of nonlinear analysis methods in the field of high-performance computing, which is one of Prof. Beckmann's main scientific areas of interest.

So when GIP was transformed into an AG, it was natural that Prof. Beckmann became a member of the supervisory board. There he represented the research & development department for 10 years and supported the board of directors, Dr. Reifenhäuser, in word and deed in his work. In addition to Prof. Beckmann's scientific and technical expertise, the Supervisory Board of GIP also benefited from his legal experience in committee work as Vice Chancellor of the University of Mainz.

At the age of 78, Prof. Beckmann decided to retire from active operational supervisory board business. However, the jubilarian is still Honorary Chairman today and continues to attend every Supervisory Board meeting.

"Prof. Beckmann is a shining example for me, a symbol of further development and an inspiration to constantly reinvent oneself." Just recently, Prof. Beckmann developed an innovative solution for digitizing the handling and recording of Supervisory Board meetings. Dr. Reifenhäuser is very grateful for Prof. Beckmann at his side: "He has a bright and attentive mind that provides very helpful input to the Supervisory Board on current developments every time and provides strong support for me."

We sincerely wish Peter Beckmann the very best on his birthday and thank him for working with us for almost 30 years. We look forward to the years to come!

For his 90th birthday, the GIP team wishes him all the best, happiness and, above all, good health.